The SR1521 is a Plan 9 system installed on a PC that serves up to 15 750Gbytes SATA disks over 1000bT using AoE (ATA over Ethernet). It is built and distributed by Coraid. We use this as our main file server. It syncs the disks once every 5 seconds, so you don't need to run any software of your own in the SR, you may just use it as a rack of disks.

The LN20 is a PC, also from Coraid, that ships with Linux installed. But you can remove the Linux partition and install a Plan 9 system on it, to serve the storage in the SR1521. That is what we did.

Because the LN20 does not have a CD reader, we just installed Plan 9 on a disk using a regular PC, and then moved the disk to the LN20. It ships with a tiny flash disk in the IDE bus, but it can be replaced with a std disk if you want to (or you can install Plan 9 in the flash disk itself). We used a separate disk, but later we learned that Coraid distributes the pre-installed Linux from their web site, so it does not matter.

We made the LN20 boot from the local disk, as a Plan 9 CPU server, and then we customized /bin/cpurc to start extra services to export the AoE storage from the SR1521.

Installation is trivial, although you may need to patch up your Plan 9 kernel in the LN20 so that it supports AoE. Ask Coraid (or 9fans) for help.

In the LN20's Plan 9, we used fs(3) to partition the huge disks in the SR. Partitions must be a multiple of (and aligned to) 512bytes. This is the start script that brings AoE up on our LN20 and defines some partitions for use:

Once this is done, we have disks partitions available to start venti and fossil. This is the script that brings up our fossil and venti (two of them). We raise the priority of fossil and venti processes because the kernel would not consider them high-priority processes by default.

This is the Plan 9 network at URJC 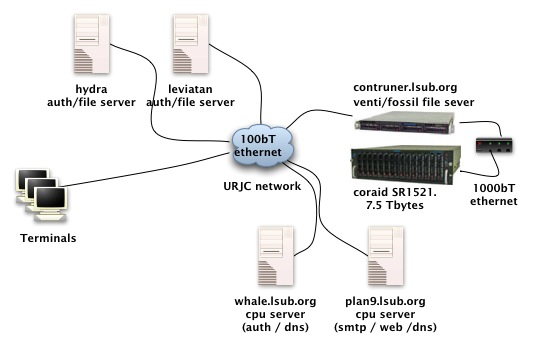 Contruner is our 4th edition file server. It uses a coraid SR1521 to supply 7.5Tbytes of raw storage, used to maintain a (venti backed up) fossil file system. DNS, DHCP, and auth services are provided by whale.lsub.org, which also keeps our old file system with a 500Gbytes venti. Aquamar, known as plan9.lsub.org, is the main frontend to the outside. It provides web and mail services. Two extra CPU servers are used as auth/file servers for student laboratories (hydra and leviatan). Most other machines are terminals, including those used at home.

The storage in contruner is maintained by using fs(3) to partition the SR disks. The SR takes care of maintain mirrors by itself, for reliability.